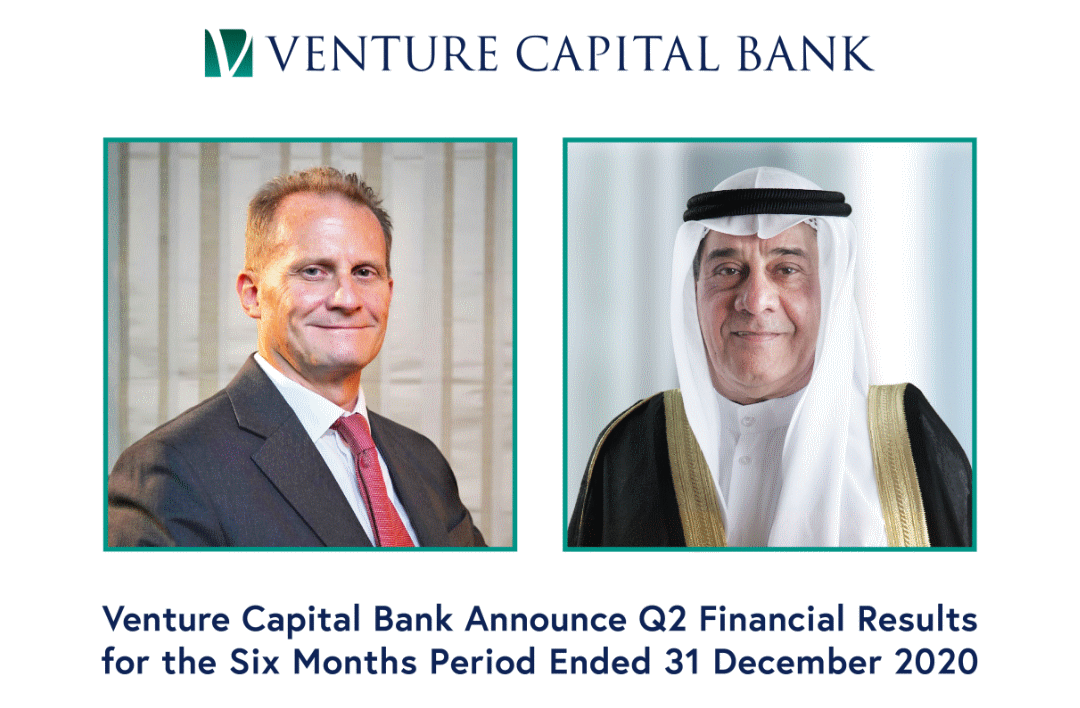 Venture Capital Bank (VCBank) B.S.C, the Bahrain-based Islamic Bank, has recently announced its financial results for the second quarter of 2020-2021, corresponding to the Three-month period ended 31 December 2020, in which the Bank reported a net loss of USD1.795 million, in comparison with a net loss of USD43.497 million (restated) during the same period of the previous year.

The Bank's total assets during the period ended 31 December 2020 has increased by 2.93% amounting to USD131.971 million, compared to USD128.220 million (restated) in the period ended 30 June 2020 primarily due to net fair value gains recorded on the Bank’s investment portfolio.

Equity attributed to shareholders during the period ended 31 December 2020 has decreased by 48.88% standing at USD10.756 million, in comparison with USD21.040 million during the period ended 30 June 2020 primarily due to provision on certain off-balance sheet guarantees and operating costs, offset by net fair value gains on investment portfolio recorded for the period.

Commenting on the financial results, VCBank Chairman Mr. Abdulfatah Marafie stated: “2020 has been a challenging year across the globe, with all institutions, including financial and economic entities, affected by the repercussions of the Coronavirus (Covid-19) pandemic, showing a decline in profitability and revenue rates. As such, VCBank has continued to adopt a prudent operational policy in line with the new shifting landscape and bear the least possible losses."

Stating further, Mr. Marafie said: "VCBank continues to take active steps to improve profitability, shore up the Bank’s capital base and address existing legacy investments in order to provide financial stability against any further provisions and position the Bank’s return to growth. The Bank is also planning a modest capital increase in which shareholders will have the option of participating in cash or in kind, by way of contributing investment positions they hold with VCBank to maintain their percentage shareholdings in the Bank."

The Chairman added: "VCBank is in advanced stages of further exits that it expects to announce shortly, serving to generate significant cash for the institution. With our debt restructuring process close to completion, the license conversion process at an advanced stage, and a healthy pipeline of income-yielding deals, we look forward to VCBank being able to restart its investment activities in the medium term, thereby generating revenue and cash flow, and returning to profitability in the near future."

For his part, VCBank Chief Executive Officer and Head of Investment and Post Acquisition Mr. Robert C. Wages stated: "The Bank is sparing no effort in the current period to accelerate the processes of exiting legacy investment and restructuring its balance sheet to move forward towards eliminating losses and returning to the path of financial stability, especially since VCBank is in advanced stages of further exits that it expects to announce shortly, set to generate significant cash for the institution."

Explaining further, Mr. Wages said: “This quarter saw a lower loss than the previous quarter by 79.26% which is due to the upside of the Fair values of the investments. In line with its initiative to achieve operational efficiencies and focus on reducing costs, VCBank continues to show lower operating costs quarter over quarter after taking into account one-off staff redundancy and other restructuring related costs.

“The Bank’s provisions have generally gone up in value; however, we have decided to take more provisions against certain guarantees that were provided to investee companies to ensure that these guarantees will not affect future capital or profitability should they be exercised. VCBank has finalized the agreements to settle its USD 70.7mn Wakala obligations and is expecting execution of the documents imminently. The debt obligation will be settled in-kind through transfer of various investment assets which will result in a cleaner and stronger balance sheet for VCBank, through budget reinforcement and burdens reduction."

"VCBank has executed an agreement to sell a 20% stake in QCon (100% of the Company), including the 4.61% owned by VCBank. Funds from sale of the stake have been received in an escrow account, pending release upon the completion of the share transfer" Mr. Wages added.